Non-volatile memory technologies continue to evolve and this year new promising technologies were announced (e.g. 3D XPoint).
Until recently, however, advanced NVM hardware was only available for high-end systems and used non-standard and incompatible proprietary hardware and software interfaces.
In 2015 new industry standards and specifications were published and Linux started getting support of NVDIMMs.

Many classes of today's applications may benefit from using true persistent memory and new types of applications will emerge once it becomes widely available.
Effective use of persistent memory requires a different programming model, new features in Linux kernel and new user-space libraries and tools.
Is Linux ready to leverage those new technologies? 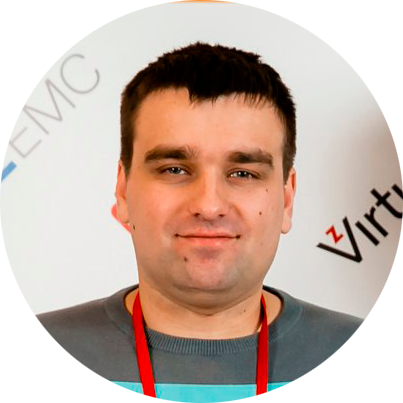 I’ve graduated from Saint-Petersburg Electrotechnical University (“LETI”) with master’s degree in applied mathematics and informatics in 2008.
My professional career as a software engineer started back in 2004 and during several years I was working for a number of Russian software development companies where I primarily focused on server side and system programming in enterprise OSS/BSS systems.

In 2009 I’ve joined EMC Corporation where I started working on advanced data path containers technology. After that I have been working in different groups on various projects from development of entry-level storage arrays to embedding of data services via KVM/LXC and SDS solutions. Currently I hold a position of principal software engineer and working on vVNX product.